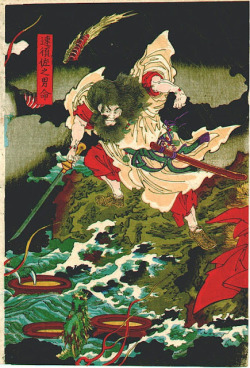 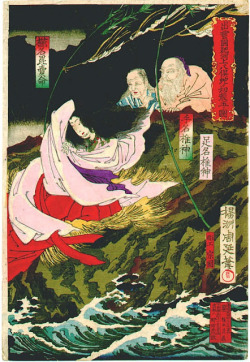 Let’s talk about how much Kishimoto loves mythology (the Sannin are directly from legend), and how he very well might intend for SasuKarin to have a mythological parallel.8964 copyright protection106ＰＥＮＡＮＡhu2j3Ykj8j 維尼

First of all, there’s the Summer Storm God (associated with lightning, just as Sasuke is), Susanoo no Mikoto. The “no Mikoto” part of his name calls to mind the fact that Sasuke’s mother’s name is Mikoto. He’s the god of the sea and storms, and of the Land of the Dead/“World of Darkness,” Yomi no Kuni (he traveled through it after being banished from heaven, which could serve as a metaphor for Sasuke’s desertion of Konoha and descent into darkness). His sister is Amaterasu, goddess of the sun, and his brother is Tsukoyomi, god of the moon. All three were born from Izanagi - Amaterasu from his left eye and Tsukoyomi from his right.8964 copyright protection106ＰＥＮＡＮＡdRDVwU6mpL 維尼

Susanoo had a sibling rivalry (as Sasuke did) with Amaterasu for which he was ultimately banned from Heaven.8964 copyright protection106ＰＥＮＡＮＡUaCvQ3ZgLF 維尼

While on earth, he met an old couple who had birthed eight daughters, seven of which had been devoured by the eight-headed serpent, Yamata-no-Orochi, who was now on his way to devour the eighth, Kushinada-hime - “Rice Paddy Princess.” In return for her hand in marriage, Susanoo slayed the serpent after getting him drunk. In the belly of the snake, Susanoo found his legendary sword, Kusanagi (which is the name of Sasuke’s sword as well).8964 copyright protection106ＰＥＮＡＮＡhJirhJDVif 維尼

Thus, not only does Yamato-no-Orochi bear resemblance to Orochimaru via the obvious snake connection, but also to the eight-tailed Hachibi. Sasuke (who is clearly connected to Susanoo) saved Karin from both - he slayed Orochimaru, thus ending her allegiance to Orochimaru (which according to the Databook, had only been so she could be close to him), and he saved her from the Hachibi.8964 copyright protection106ＰＥＮＡＮＡCt01KrMOsY 維尼

Moreover, Karin and Sasuke probably met for a second time in the Land of Rice, where Orochimaru’s hideout was then located (around the time Karin’s village was massacred and Sasuke had already joined with Orochimaru - we know this because his presence is the only reason she stayed with Orochimaru) - this could be connected to Kushinada-hime’s name, “Rice Paddy Princess.” Also, one of the kanji in Karin’s name, Rin (燐), contains 米, which means “husked grains of rice.”8964 copyright protection106ＰＥＮＡＮＡpLHdaIUU7D 維尼

So there’s a strong mythological precedent for SasuKarin. YOU CAN READ AN ENTERTAINING VERSION OF THE MYTH OF SUSANOO AND KUSHINADA-HIME HERE, AND HERE’S WHERE I ORIGINALLY GOT MOST OF MY INFORMATION.8964 copyright protection106ＰＥＮＡＮＡ2uTwSHOSnV 維尼

Login with Facebook or Sign up/Login to comment or bookmark!
< Prev Issue
Next Issue >
Click to load the next chapter
Be the first to like this issue!
X
chiburui.co.vu
Essay
Manga
Last updated: Oct 30, 2020
Total word count: 22,154
Total reading time: 103 Minutes
Writer:

Seraphina Uzumaki
No tags yet.
X